The highly anticipated opening of the Dominican Republic’s newest, and perhaps most spectacular, Samana Highway has taken place at last!

This modern roadway connects all the major tourist centers of the world-famous Samana Peninsula region with the rest of the island nation and with the convenient Samana-Sanchez International airport.

From this airport, serviced by European and North American airlines, all of Samana, now lies within an hour and fifteen minutes of a major overseas gateway.

Known as the Atlantic Boulevard, the highway winds along the north coast from near the International airport through Las Terrenas, El Limon, Samana town, and Las Galeras at the peninsula’s eastern end. But it is not the towns and villages, as lovely as they are, which grasp the eye. Rather, it is the amazing variety of natural beauty which rewards the eye of anyone fortunate enough to drive this wonderful highway. 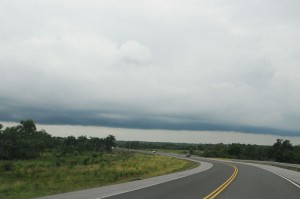 On a trip east along the Atlantic Boulevard, the driver or passenger will experience the mystical beauty of the Los Haitises National Park and spectacular vistas at the Bay of Scotland. Too, the tourist will experience the world’s largest contiguous stand of coconut palms, listed by the United Nations as a World Heritage Site. Indeed, dozens of miles of the once-remote, nearly inaccessible Atlantic coast of the Dominican Republic are now reachable via a modern road complete with safety features as modern as any in the world.

In the months of January, February and March, another treat awaits the traveler along this path. The annual migration of the Atlantic Humpback whales ends at Samana Bay, where females calve and nurture their calves. In the Atlantic, close to shore, bands of Humpbacks, often bachelor males, may be seen feeding close to shore.

Several decades of tourism in the Samana region has finally seen the area reach a kind of maturity. European tourists of French, Italian, British, Spanish and German backgrounds have mixed with Canadians and Americans to create a truly international feel in places like Las Terrenas and Las Galeras. Many artists and craftspeople have mingled with restaurant operators and hoteliers to lend these charming Dominican towns a flavor that should not be missed.